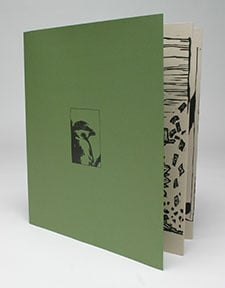 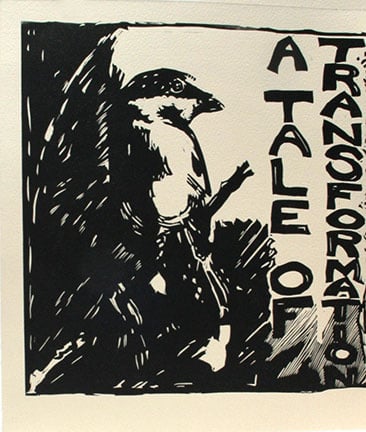 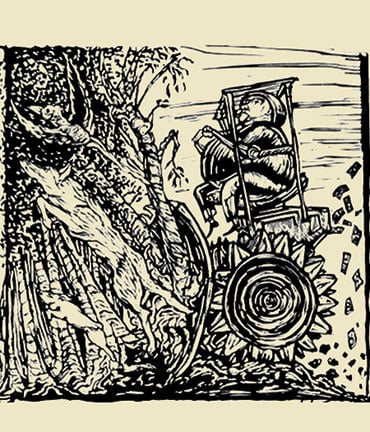 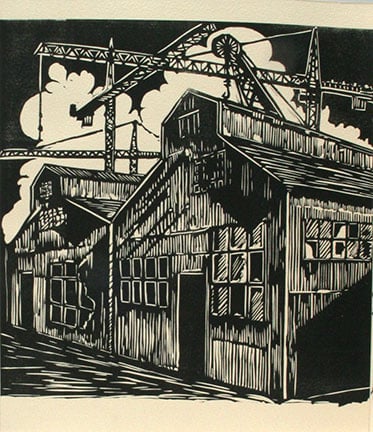 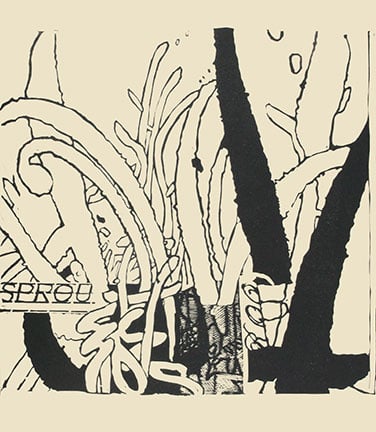 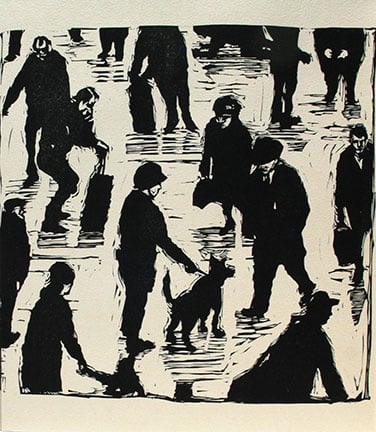 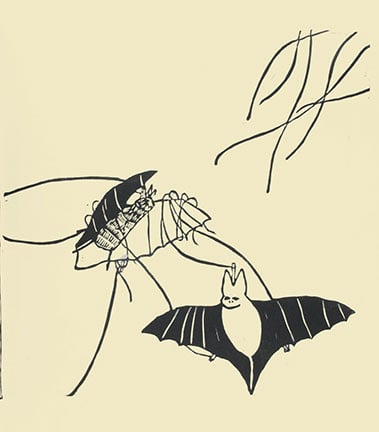 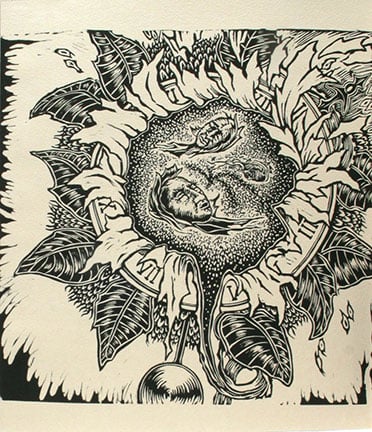 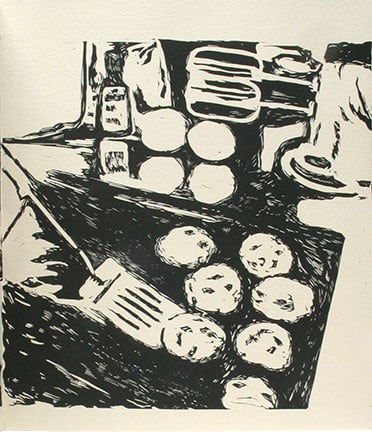 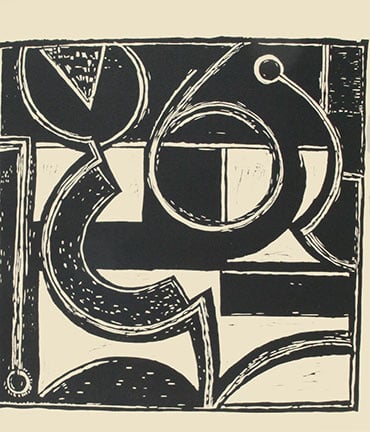 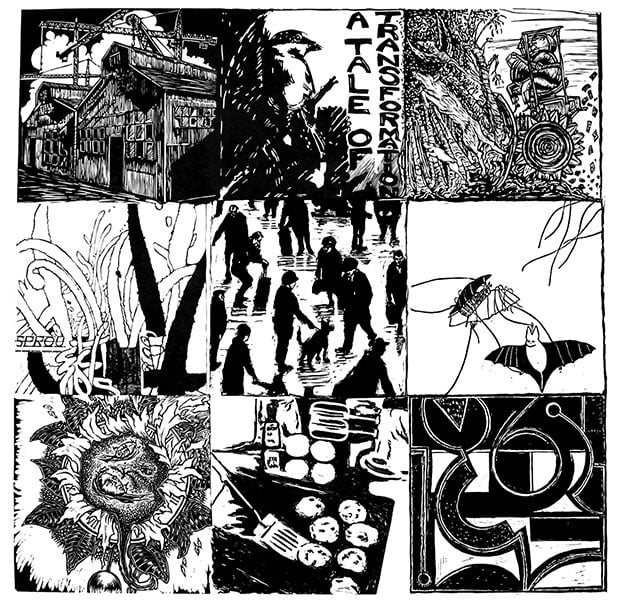 Nine artists contributed to a three by three-foot linoleum cut print, highlighting the diverse styles of artists who have published with Eastside Editions in the past six years: Chester Arnold, Dave Avery, Dick Cole, William Conger, Jessica Dunne, Art Hazelwood, Frances McCormack, Jenny Robinson and Jennie Smith. The block was cut by Eastside Editions printer, David Avery and artist Art Hazelwood. The print was created with a two-ton steamroller at the fourth annual Roadworks Street Fair, produced by the San Francisco Center for the Book.

A Tale of Transformation won a Merit Award at the Sebastopol Center for the Arts book exhibition, "Bibliophoria I" juried by Donna Seager, which ran from June 18 - July 26, 2009.

A Tale of Transformation is the result of The San Francisco Center for the Book’s invitation to Simon J. Blattner, publisher at Eastside Editions, to participate in their annual Roadworks festival. Each year the invited artists carve a 36” x 36” piece of linoleum which is printed on the street using a steamroller. This year’s theme, as designated by the Center for the Book, was the exploration of the narrative process. In response, Simon decided that nine artists from Eastside Editions would be invited to create images. The only bit of information to be suggested to each artist would be the title of the project, A Tale of Transformation. The aim was to create a different kind of narrative structure by means of chance.
Each of the artists created a 12” square black and white drawing that was transferred to the linoleum, which was then carved by David Avery and Art Hazelwood. The result was inked and laid out in the street, covered with paper and blankets, and run over repeatedly by a steamroller.
In order to further develop the narrative quality of the print, Simon chose to reconfigure the print as a horizontal accordion fold book. Before doing so, an edition of six copies of the print, in its original configuration, was printed by hand. The block was then cut up into smaller sections and printed on our Charles Brand press at Eastside Editions studio in San Francisco.

In the same spirit of blind collaboration Eastside Editions sent a series of questions to the artists resulting in the following “interview”.

How did the title “A Tale of Transformation” affect your image, if at all?
I did think about the narrative issue and then I decided not to think about it because there’s always a narrative supplied by the viewer.

All my work involves transformation, all artistic practice does, but my imagery sometimes depicts formal transformation so I simply felt at home.

I thought of the title as a political statement, I guess because I am so embroiled in politics and the chaos of the world right now. I approached the transformation as a destructive act. I guess I was hoping that someone else might bring the transformation around to a positive outcome. But I left that to someone else. And for me, tale of transformation, suggested a fairy tale… no fairy tale ever got off the ground without some very bad news in there somewhere.

What issues came up for you in working blind in regard to what the other artists were doing?

A bit of extra anxiety, how will this look, will it fit or jump out? Which would I prefer?

It felt strange to work on a panel of nine in isolation, but probably a lot less stressful than knowing what the other artists were doing and trying to come up with an image that would fit with everyone else’s ideas.

I tried for an image that was both striking, but ambiguous enough to hopefully flow from and into the images surrounding it. I hoped that by offsetting the image, it would help give a direction to the narrative flow.

Do you normally work within a narrative framework? And if not how did you approach this challenge?

I think there’s always a narrative but in my case my abstract shapes tell stories to each other and elicit the viewers’ stories, too. I try to keep a little distance from the conversations.

deKooning famously referred to "the slipping glimpse" most of my work has "a slipping story", just barely there.

No! I decided , after too many images ended in the bin, to continue with the themes I generally work on anyway, which happen to be about urban decay. Adding the cranes was all I had to do, I felt, to fulfill the premise.

I may not start out with a narrative structure, but I always end up with one, however open ended it may be.

Do you see it in a narrative context that was not evident before?

I see it as being the daydreaming child of some of the other pieces. When shapes aren’t performing the grown-up roles of representing things, they just fool around like kids at play.

Yes, it did fall into place.

It was strange to see such supposedly disparate styles and images fall into “place”. From that it was much easier to imagine any number of possible “tales.”

The sense of decay, destruction and loss seems to give way to a rebirth into chaos. It does strike me that there is an entropic dissolution leading to rebirth and a new chaos. If I were to tell the tale it would be this, the decayed warehouses of a post-industrial age displacing nature, and devouring ever more the natural world, leads inexorably to the police state. But nature reasserts itself, at first through dark forces, and unfulfilled desires, but it germinates and festers and cooks itself into a new chaos, a new big bang, and a new Genesis.

Could you write a version of A Tale of Transformation that has become evident upon seeing the work as a whole?

Far away an old fat man dreamt about the mill in the middle of the fairy dream woods that had been abandoned long ago. One day he decided to go find it and start it up again. After looking for a long time in the misty, dreamy woods he found the mill and he wondered what he would make with all the rusted machinery. He wanted to make money and be happy. After a while, without getting a good idea about making money and happiness he figured that he’d build a bulldozer from his scrap pile and clear away the misty woods hoping that by the time he was done he’d know what to do. And so he did, and when he drove his bulldozer hard and fast into the woods, he knocked down all the trees and killed all the plants and the daydreaming animals ran away. Then the woodsy mist lifted and drifted off to the city where it rained for a week before freezing into ice covering all the streets. A huge crowd of city people gathered and began ice-skating, thinking it would be fun to play like that but after a short while they became sad because they really wanted to make money and be happy, not just aimlessly skate around having fun. Other creatures, like bats and butterflies, never worried about money and happiness. They enjoyed playing all the time, just going hither and yon having fun. They had no fear. All the people they had ever seen seemed to devote their lives looking for money and happiness but never had any fun. They vanished into that terrible human ring of fire – desire for this, desire for that. The fun loving, daydreamy animals felt that people simply enjoy the moment; you know, eat cookies and do fun stuff. After a very long time the rusty mill was running again. The old man had got it going but wandered away when he couldn’t get it to make money and happiness. Now it just made dreams, the only thing it ever made, and the fairy woods was becoming mistier and mistier. Soon all the animals, including the bats and butterflies, would be back loafing around amidst dreams of fun.

I am teaching a class next year at SFAI on collaboration. This seemed like the tiniest bit of collaboration, maybe a good place for my students to start... so what has been transformed may be my 2009 "Collaboration: Influence and Execution" syllabus.

Not me! Im not a writer.

There are many such versions. One might be:
There were birds in the trees. Unfortunately money does grow on trees, or rather, trees are made out of money, as the destroyer plainly shows, merrily thinking that he has devoured (monetized the space) the best of what is offered. Hold it, not so fast! The mysteries of life are not so easily come by, are they? The secret life of plants is plainly beyond his reach. Meanwhile, airport security has never been better. I feel so safe….Aaaagh! The Bats! The Bats! But not to worry, they are but one among many of the angels whose abode is the warehouse of dreams, watched over by friendly construction machinery, ready to come to assistance at a moment’s notice. But what is a moment when time is told by a sunflower? Nature reasserts itself and we dream within its never-ending cycles of seeding and harvest. Mmmm, cookies! And then…the façade of objective reality falls away, revealing the hidden forms that compose the universe. Nirvana.

San Francisco – Eastside Editions and Warnock Fine Arts extends an invitation to a new print book release celebration for a collaborative book project involving prints by nine artists who have worked with the fine art print publishing studio, Eastside Editions of San Francisco.  " A Tale of Transformation," began as a 36" x 36" linoleum cut print and which has been reconfigured into an accordion page book featuring images by Chester Arnold, David Avery, Dick Cole, William Conger, Jessica Dunne, Art Hazelwood, Frances McCormack, Jenny Robinson and Jennie Smith. Published by Simon Blattner and Eastside Editions. The release celebration occurs Wednesday, July 30th, 5:30 to 7:30 pm at Warnock Fine Arts located at 49 Geary St. Suite 211, San Francisco, CA (415) 677-4001.  “ A Tale of Transformation” is the result of The San Francisco Center for the Book’s invitation to Simon J. Blattner, publisher at Eastside Editions, to participate in their annual Roadworks festival. Each year the invited artists carve a 36” x 36” piece of linoleum which is printed on the street using a steamroller. The theme, as designated by the Center for the Book, was the exploration of the narrative process. In response, nine artists from Eastside Editions were invited to create images with the only bit of information suggested to each artist by the title of the project, “A Tale of Transformation.” The aim was to create a different kind of narrative structure by means of chance.
Each of the artists created a 12” square black and white drawing that was transferred to the linoleum, which was then carved by David Avery and Art Hazelwood of Eastside Editions. The result was inked and laid out in the street, covered with paper and blankets, and run over repeatedly by a steamroller.  In order to further develop the narrative quality of the print, Eastside Editions reconfigured and printed the images as a horizontal accordion fold book. The resulting book keeps alive the spirit of blind collaboration where disparate styles and images fall into place, creating the possibility of any number of “tales.” 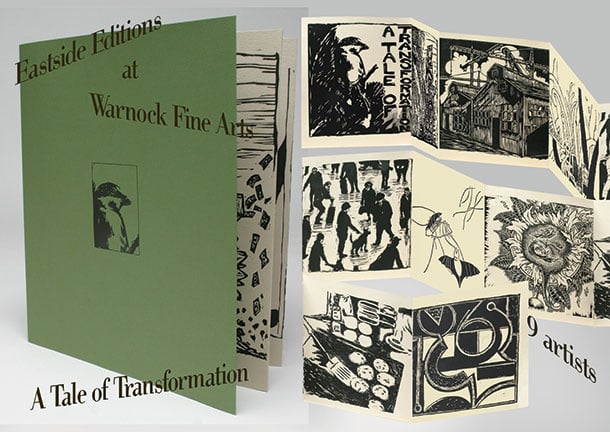 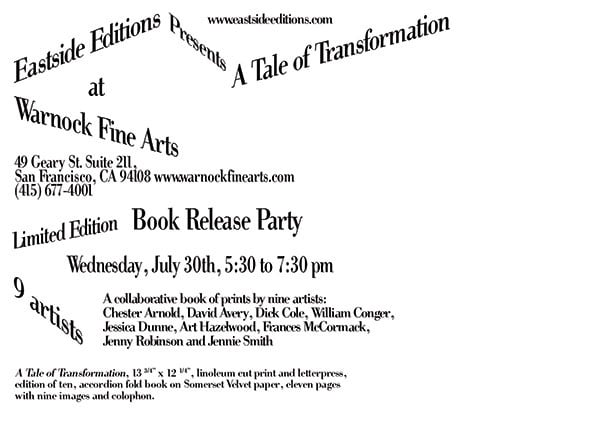 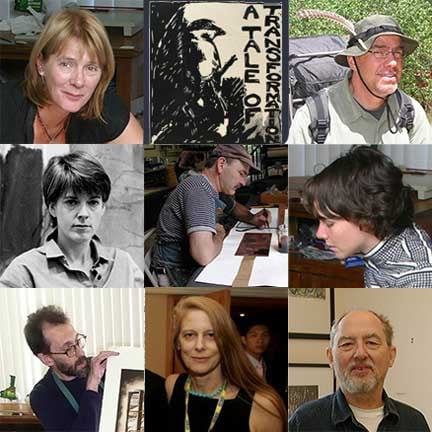