Simon Blattner was the curator of a 2018 exhibition Libros de Artista: Artist’s Books from Mexico and the Mexican Diaspora. The books included in the critically acclaimed show are also featured in Blattner’s book by the same name.  An expert in artist books, Blattner has hands-on knowledge of the intricate printing process involved in creating the unique works. He accessed world-class collections and journeyed to Mexico to seek out emerging artists. Blattner will read and sign copies of the book for sale in the Museum Store.

Free and open to the public

Simon Blattner was the curator of SVMA’s 2018 exhibition Libros de Artista: Artist’s Books from Mexico and the Mexican Diaspora. The books included in the critically acclaimed show are also featured in Blattner’s book by the same name.  An expert in artist books, Blattner has hands-on knowledge of the intricate printing process involved in creating the unique works. He accessed world-class collections and journeyed to Mexico to seek out emerging artists. Blattner will read and sign copies of the book for sale in the Museum Store.

Simon Blattner will be at the

San Francisco Center for the book on Friday, September 13th at 6 pm for a free book reading. Join us and register at

A Tale of Transformation won a Merit Award at the

A Tale of Transformation,

Jenny Robinson will be shown at the

Jennie Smith, Works on Paper at the

The Whitney Museum of American Art in New York acquired three prints of Art Hazelwood's in May of 2008.

The Library of Congress in Washington D.C. acquired two prints of Jessica Dunne's in May of 2008.

Jenny Robinson - Had a print, Billboard, selected by artist Jane Hammond for the

New Prints show Spring 2008 at the

International Print Center New York. Her image was used on the card for the show as well.

SPRING OPEN STUDIOS: APRIL18-20. Please join us Eastside Editions for this April 18-20 at six great studio locations, all within two blocks of each other, in the bright and sunny South of Market (SOMA) neighborhood. This year, over 60 artists will be displaying their work in an incredible variety of media, including ceramics, collage, glass, drawing, furniture, mixed media, painting, photography, printmaking, sculpture, textiles, and more. Enjoy an evening art stroll on Friday, April 18 from 6 to 9pm, between each venue. On Saturday and Sunday, April 19-20, studios will be open from 11am to 5pm. 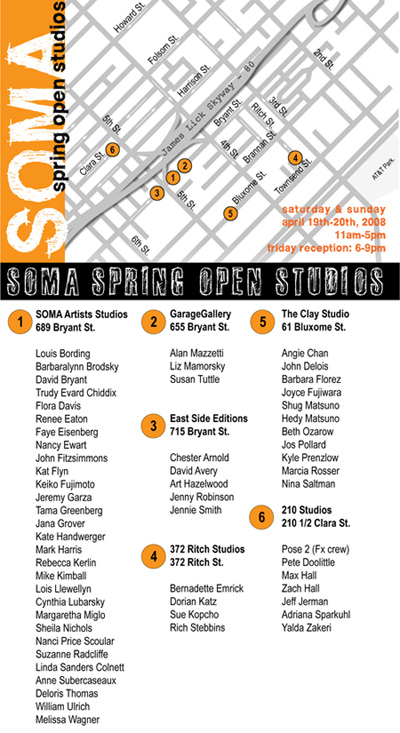 Davidson Galleries, 313 Occidental Ave S, Seattle, Washington 98104, April 4 - 26, 2008. Opening reception with the artist: "First Thursday", April 3, 6-8 P.M. Robinson King's Cross Relic. 2007. Etching, aquatint. 1/3 e.v. 27 x 37 inches. Jenny Robinson’s earliest impressions of the effects of light and shadow were formed in Malaysia where she was born and spent her early years. After studying in the U.K. and traveling extensively she moved to San Francisco in 2000. Her current body of work, large scale intaglio prints, examines the effects of light and shadow on urban, industrial architecture. In particular it focuses on scenes taken from urban environments in cities such as London, New York, and San Francisco, where she seeks out the overlooked, the mundane and the everyday urban structures such as warehouses, gasometers and overpasses. The artist’s use of large etching plates and monotypes effectively captures the grittiness and mystery these places often evoke.

VAGADU will be celebrating local artist

Kara Maria in San Francisco. For weekly updates on the process of creating Vagadu's Kara Maria. collection, check out their blog

Kara Maria - Exhibition, Dystopia, at the

New York in New Prints/Autumn 2007. From November 1, through December 19 the show will be at the IPCNY in New York and then travel to Columbia College in Chicago where it will be shown from January 16 – February 22, 2008.

David Avery has work in a very important exhibition in New York.

Multiple Interpretations: Contemporary Prints in Portfolio at the

New York Public Library, Oct. 26 to Jan. 27. This show features work from the Library's print collection by twenty-three artists who have created multiple images to form portfolios in a wide range of styles and subject matters. My portfolio, God's Food or

Der singende Knochen is being shown in its entirety.  David is also  a part of Selections, a juried show of twenty Open Studios artists showing at 111 Minna Gallery (@2nd St.) The opening reception is from 7:00 to 8:30  Thursday, Dec. 6. OR, you could attend the VIP reception from 5:00 to 7:00, if you really want to pay 75$ a pop. Three of his newest etchings will be on display.

Don Williams at the

The Achenbach Collection recently purchased a monoprint by

Jenny Robinson called Gasometer, 2006. Jenny is currently in a show at the

From the Ground Up: Painting, Process & the Garden at the

Palo Alto Art Center, June 21- September 9, 2007. The exhibition is a mid-career survey of the work of Frances McCormack. The imagery in her lush paintings is influenced by the history of gardens, as well as the many processes in the making of gardens. McCormack is a resident faculty in painting at the San Francisco Art Institute. “ From the Ground Up: Painting, Process & the Garden” June 21, 2007, 6 – 6:30 pm, A slide presentation by Frances McCormack.
Summer Solstice Reception, June 21, 2007, 6:30 – 8:30 PM, Palo Alto Art Center, 1313 Newell Road Palo Alto, CA 94303

The Hearst Art Gallery has paired two of the most intriguing, unusual and gifted contemporary California landscape painters for

"Town and Country: Jessica Dunne and Louis LaBrie," on view from June 2 to August 12. Dunne's dramatic, expansive and atmospheric urbanscapes are presented alongside LaBrie's meticulously painted, often tiny and jewel-like vistas in one of the most visually beguiling summer landscape exhibitions ever presented by the Saint Mary's College art museum. A catalogue accompanies the exhibition. The Art Museum of Saint Mary's College of California, The Saint Mary's Hearst Art Gallery is the only accredited art museum in Contra Costa County. Its outstanding, varied exhibitions and art collection attract visitors from the College, the County, the entire Bay Area and beyond.

PRINTS OF WAILS, Art Hazelwood: Instead of just screaming at the TV, artist vents his anger in political linocuts. A review of Art Hazelwood's political art show at Mission Grafica by

Pulcinella in Hades, and Italian artist

Eastside Editions has moved to San Francisco! As of December 1, 2006. After six years in Sonoma we bid a nostalgic farewell and welcome you to our new studio. We'll be up and running soon. Eastside Editions, 715 Bryant Street, San Francisco, CA 94107, 415 538-9400, email:studio@eastsideeditions.com

Conflict and Art at the Cantor Arts Center, Stanford University (an historical survey including one of 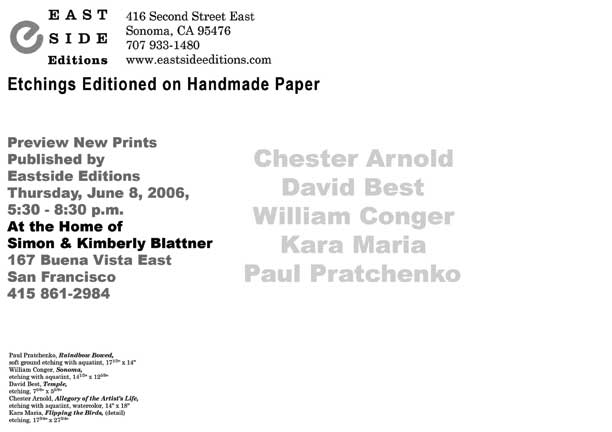 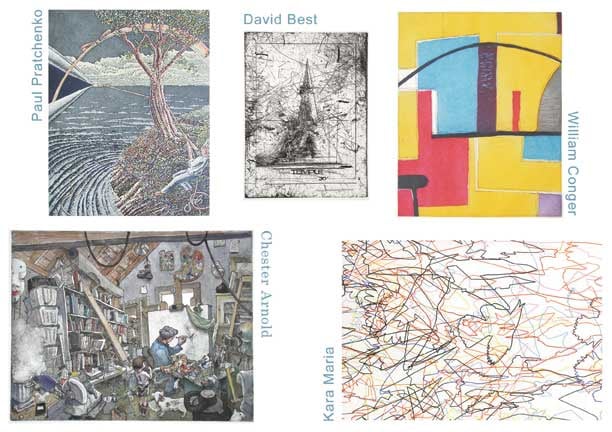 Kara Maria will have two large, new paintings and her new etching from Eastside Editions included in this show at the

Kara Maria will have a painting in an exhibition at the 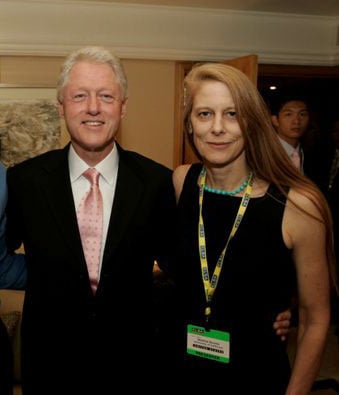 Simon Blattner, Publisher of Eastside Editions is honored to have been selected as a visiting scholar at the

American Academy of Rome. During the Autumn of 2005 he will spend two months there researching the history of papermaking in Western Civilization.

You can follow his blog of his adventures HERE.

Cyrano and the Four Humors - Literary Prints of 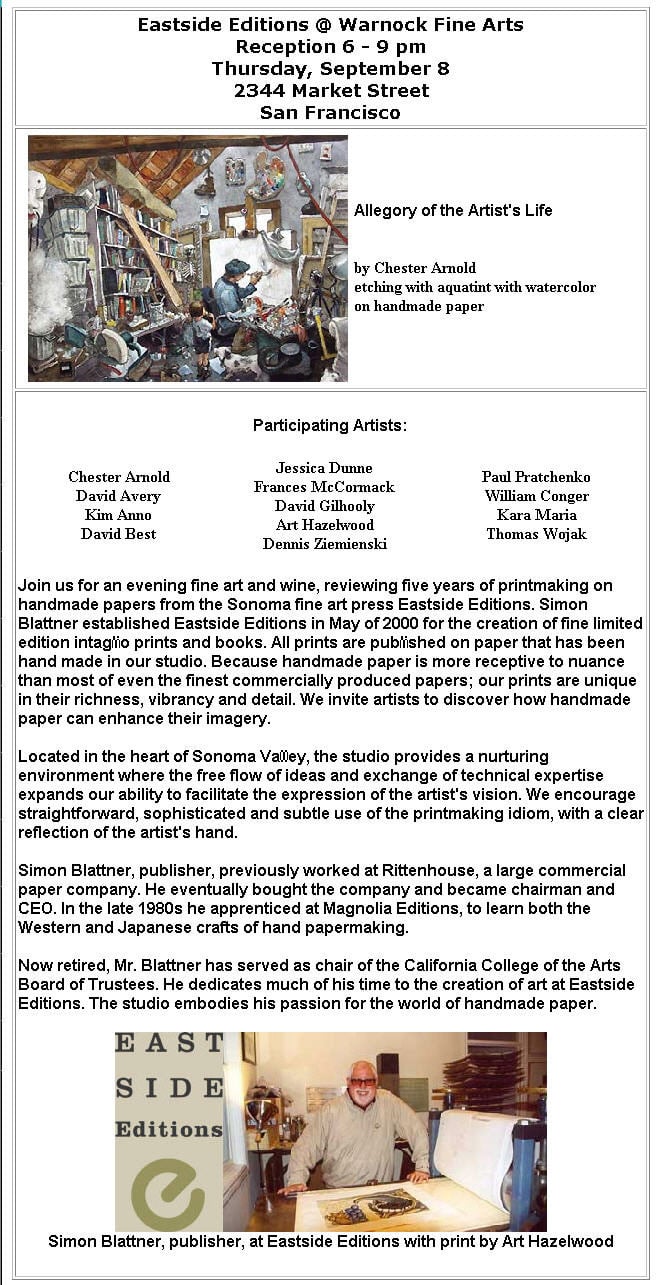