Animal symbolism in art begins with Neolithic cave painting. Divine sacrifices in religious rituals evolve into symbols of vices and virtues in folklore, and then, in contemporary culture, into human surrogates. Two artists who focused on the theme were the 19th-century Quaker preacher-artist Edward Hicks, whose many 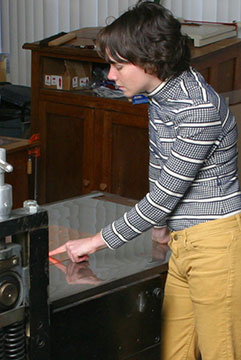 depictions of the Biblical Peaceable Kingdom portray the lion lying down with the lamb (Isaiah 11) in a bucolic Pennsylvania clearing; and Franz Marc, the early twentieth century German Expressionist famed for his spiritualized red and blue horses and yellow cows, who ardently admired the purity and simplicity of animals.

San Francisco artist Jennie Smith joins this tradition with her etchings, drawings and watercolors of humanized endangered animals (Northern Spotted Owl, Aleutian Canada Goose) and their nests, hives and burrows. Her elegant etchings, published by Eastside Editions in San Francisco, with their fluent line and delicate floral color set against the pristine white page, radiate calm and well-being; her animals are simplified and endearing, like the benign, helpful creatures in fairy tales, but also apparently asleep or dreaming, because their eyes are always closed: instinct in animals is analogous to spiritual bliss in meditating Buddhas. In both prints, Smith’s animals are metamorphosed into marionettes, complete with strings and wooden control bars, reflecting the artist’s interest in zoomorphic kites.

In Without, the marionettes lie sprawled on the page surface, awaiting another puppeteer; their H- or X-shaped control rods, seemingly overgrown by flowers, shells, raffia and beads, become nests or homes, or home planets.

In Another Story we see a similar scenario: three towers, or totem poles of a dozen or so animal heads, stand upright, slightly swaying, their strings and control bars having been cut. Snail, owl, raven, badger, pigeon, elephant, leopard, boar, and buffalo somehow maintain their balance and preserve their formations, even with eyes shut.

Smith’s images may be endearing, but they also read ambiguously, given their urgent environmental subtext — both folklore and specimen, both Beatrix Potter and John James Audubon. The cozy cocoons and their sheltering denizens seem to be observed intact ‘in the field,’ but often the specimens are teased out across the page like “stratified ecosystems” awaiting inventory. The implied light in these generally high-key works is bright and diffused, and the backgrounds are blank and unshadowed, adding to the indoor/outdoor ambiguity.

In his notes on Smith at the 2006 Whitney Biennial, Guy Carrion-Murayari acknowledges the fairy-tale side of the work (“nature’s creatures lie tucked in sleeping bags”), but also elucidates the ecological and activist message of her “nomadic community on the move,” exemplifying as it does, “cooperation, community and dynamic change.” Smith’s lyrical work, while far from polemical in tone, advocates seeing life holistically, and ceasing to regard a now globally threatened nature as fodder for our economic juggernaut.

To learn more about Jennie and her art, visit her website at 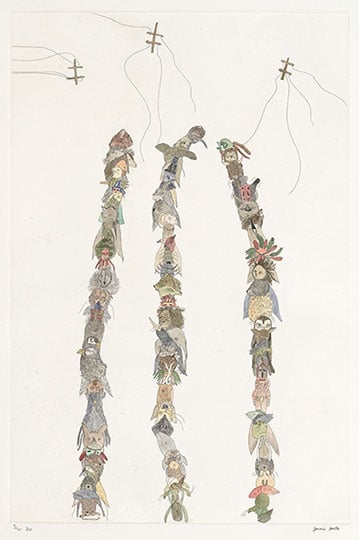 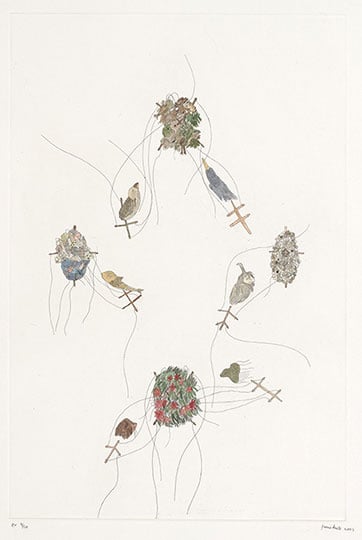 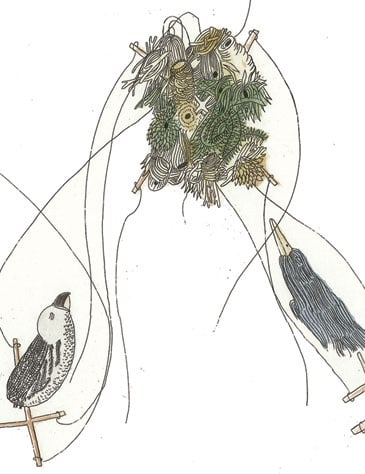 Without (detail), etching with watercolor
Column 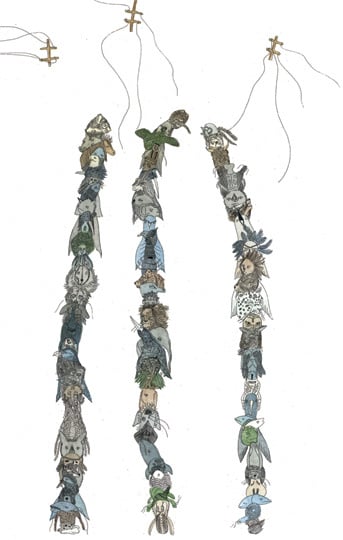 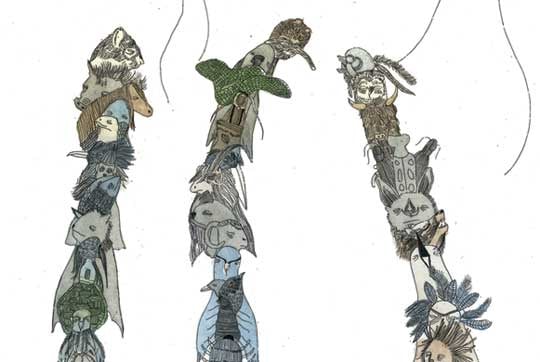 Another Story (detail), etching with aquatint 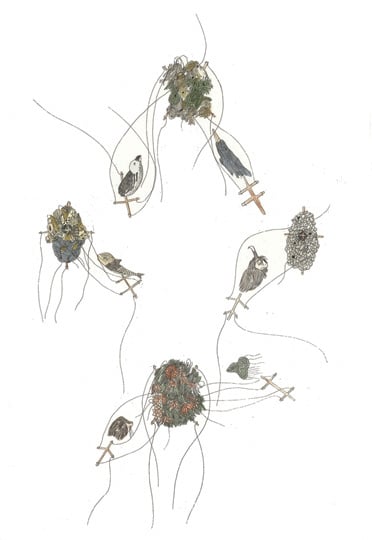