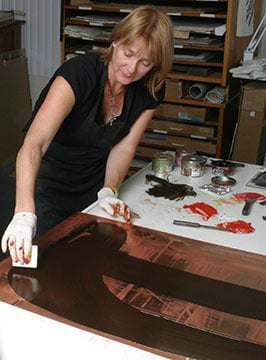 Printer David Avery sat down for an interview with Jenny Robinson about her inspirations and the process of working at Eastside Editions.

David Avery – Perhaps the first thing to ask, given your background, is what drew you to printmaking, why did you decide to become a printmaker?

Jenny Robinson –When I did my foundation course in England, it was just printmaking, printmaking is what captured me, you know, because when you’re in foundation you do so many techniques, and we did quite a big block in printmaking. It was just the one thing that I found, that and photography, that I really found that I was creative. I enjoyed it and I really enjoyed sort of the detail orientation of printmaking.

DA – Given that you chose that, how do you select and develop your images? How did you get into the urban landscape image?

JR – Well, when I went to college I did a lot of traveling. And I took my watercolor sketchbook with me and I found that I was drawn to architecture and the way the light fell, especially in places like India. The light’s very strong there. And although the work I was doing then was a bit over romantic, I suppose, maybe not romantic, but it was more color orientated and detail orientated because although I was doing sketches I was also taking back-up photographs. And then when I got back to England and I would do the work, I would get too bogged down in details from the photographs.

So what I’ve tried to do within the last ten years or so is to paint photographically inspired work but rely on my sketches much more for the sense of the place. The sketches are much more intimate and they’re much more what I want to try to convey in the prints. So I tried to use back-up photographs just to get the details I want in. And then I’ll put that aside and I’ll work from my sketches which are much much looser and much more intimate and they kind of have that atmosphere that I want to create in the work.

JR – For that I did a couple of really loose sketches with more rectangles and color sections for the shapes more than anything. And the shadows came later. They create the true shapes within the shapes that are really there. So that is what I was trying to concentrate on and I use photography for the initial drawing. And then I try to put that away and just play with colors and shapes much more.

DA- You’re an accomplished printmaker in your own right, primarily monoprint, but you came to work in a studio with a printer. How is it to work with a master printer and does it change your approach or do you have any particular observations about the difference in working that way? 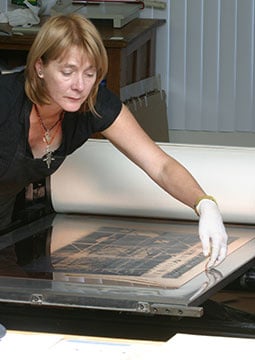 JR –It is very different, obviously. I‘ve really enjoyed it because it’s nice to sort of spend time with another human being which you don’t do when you’re in your studio. And I think because I haven’t done multi-plate etching since I was in college it’s been great working with you because I wouldn’t have known where to start.

I think it’s a little less spontaneous. Because that’s the way I usually work – more painterly. So I’ll make my plate and then I’ll put the colors on in a much more spontaneous manner and each print is totally different. And that’s probably the biggest change for me working with you… making editions. But it doesn’t mean I haven’t enjoyed the challenge. I’m enjoying the challenge and it’s also really nice to have an edition. Especially of something that took so long. And these prints took what, three months?

DA – Well worth the time.

JR – And I think it really shows in the prints.

DA – I was curious because there’s a remark in your bio about the type of monoprint you do enabling you to work unhindered by more complex printmaking methods.

JR – Well, I think part of that maybe is because I wouldn’t have the patience to do that on my own. And to work with someone very clearly who knows what they’re doing and also the fact you know, you do a lot of the work.

JR – You do all the prints. You edition them.

JR – Yeah, so you know I think I wouldn’t have the patience to actually print an edition of twenty, and great that you do that. I think the technical aspects of it to get somewhere have been great for me because it’s something different from what I usually do. And I love to learn to print differently.

DA – Do you find that that influences you going back to your monoprints? Do you approach those with any difference?

JR – I don’t know because I think everything you do in printmaking you learn something new. And I mean that’s what I love about printmaking too is that it doesn’t matter who you meet your going to learn something interesting. I just did a monoprint workshop in Chico and I mean I learned a bunch of stuff. And also I think printmakers are very generous as well. They’re very generous with their knowledge. And that’s one thing you can say about printmakers, is that they’ll show all the knowledge they have and they’ll gladly show it. I mean I learned five or six different techniques up there in Chico. And the same as working with you now I learn a lot of new things. And I think all of that is in the next set of work that you do.